What is cannibalisation and why does it matter?

When many of your own locations or competitors are located in the same area as the location you want to open, their catchment areas will overlap. The presence of these competing stores will decrease the potential of the location you analyse. This effect is known as cannibalization.

By considering this effect, a manager gets a more accurate picture of a location’s true potential. If a shop owner wishes to open a new branch, she can immediately see whether that new store would “steal” potential customers from existing shops in the same area and how many. All these surrounding locations have an effect on the number of people that is expected to visit a store, as shown in the image below. 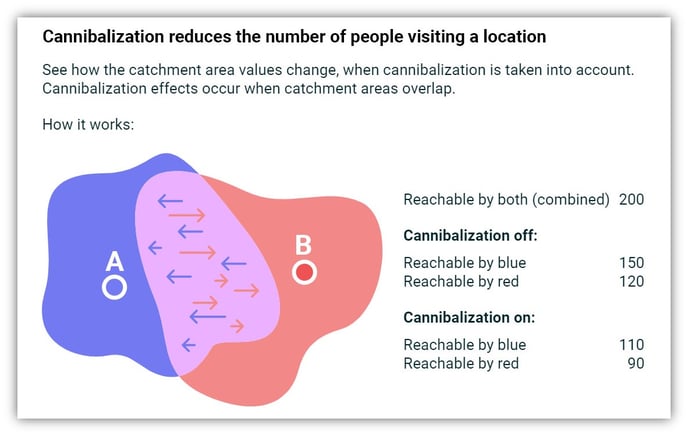 Although reality is more complex, the assumption behind cannibalisation analysis is that a person only visits one location and is not counted twice or more when catchment areas overlap. This overlap would lead to a significant loss of potential customers when rival chains are located in the same area, but customers only care for visiting a single chain.

Using the cannibalisation feature in LOOP

You can do this when a location is selected. On the map, you will see that the catchment area the most cannibalised will turn blue, whilst the uncannibalised area will remain pink: 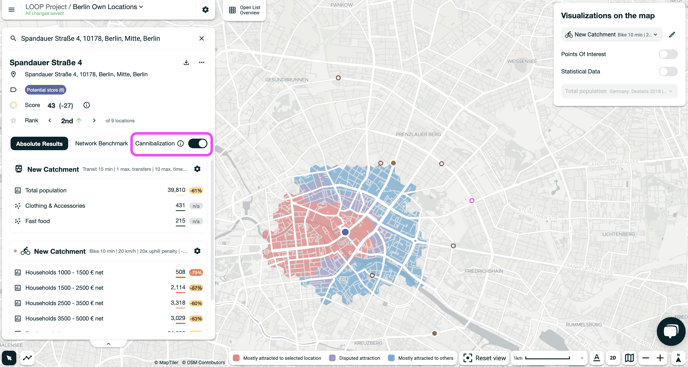 You can also turn cannibalisation ON from the table:

When cannibalisation is turned ON will see percentage values next to the each statistical data (e.g. -9% for total population in the example above, for the 1st location in the table). This indicates the amount of people lost to other locations. It shows the difference compared to the original value, when cannibalisation was not considered.

Impact on the score and rank

The rank and the score of your location can also be impacted as a result of cannibalisation. A location that had a high potential can become much less interesting when other stores are taken into account.

For instance, the location below showed a high potential. However, when taking into cannibalisation, its rank among all my locations dropped from 3rd to 7th. The population it can now reach is 63% lower. 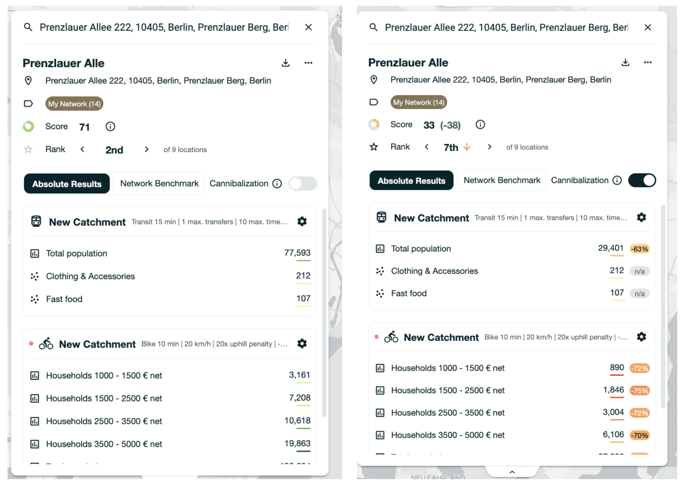